AE LANA: the late Mr. Vicha Tranaksaranon and his daughter Ms. Srisunee Kiatwatcharawit, Ae, the co-owners of AE LANA Chiang Mai Eclectic Hotel
had fallen in love with Chiang Mai while visiting Chiang Mai from time to time, both on business and private trips. Ms. Srisunee has travelled
extensively to many parts of Chiang Mai and talked with many local residents. Not only did she fall in love with the city, but also the hospitality of its people.
Throughout her life, Chiang Mai has remained Ms. Srisunee’s most regular and frequent destination. She also would like other great fans
of Chiang Mai to live in the city where they can emerge themselves in the beauty of the former Lanna Kingdom’s capital. Most importantly,
she would be able to happily whisper of her late father, saying
“I have made it for Dad.”
MEANING OF TRIANGLES

There is a large mural painted on our building. It is composed of various small triangular shapes, each representing distinctive and diverse stories of Chiang Mai.
The triangles have been carefully assembled to form the whole picture of Chiang Mai. Each small piece of the triangles can be arbitrarily interpreted.
For these triangle shapes, some interpreted meaning appear to surprisingly overlap between people with different worldviews.
Christians and Buddhists may share similar interpretations and associations with their religious beliefs. For Christians, the figure may symbolize the Trinity:
the Father, the Son and The Holy Ghost. For Buddhists, this figure also resembles the Lanna’s  seven-branched candelabra,
which is used as a shrine for worshiping the three jewels of Buddhism. As we are recall the harmonies relationships of differences,
we recognized the peaceful coexistence of two communities with different religious beliefs, the Nong Pra Teep and The Nong Pra Krung.
Incidentally, a number of Lanna’s items are in triangular shape, for instance, triangular backrest, pillows and stuffed dough pyramid desserts. 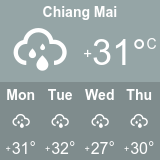